Bitcoin is at an impasse: over the past six to seven weeks, the cryptocurrency has been caught in a relatively tight holding pattern that has seen it range between ~$8,500 and ~$10,000.

Every attempt at deviating from this range has resulted in a rejection, with bears and bulls failing to establish a directional trend as the S&P 500 also flirts with topping out.

A top analyst that predicted at which point Bitcoin would bottom in late 2018 recently provided insight into which way the crypto market will likely head next, using the S&P 500 as a guide.

Six months before Bitcoin bottomed at $3,150, an analyst predicted that $3,200 would be the point at which the bear trend would bottom.

The same analyst is now predicting that Bitcoin will see a 30% retracement in the coming month, noting how the S&P 500 is showing signs that it will see an “ABC” correction lower as per Elliot Wave analysis.

“I was bullish on BTC here but am beginning to think a 5 wave move up and larger ABC down may now be underway,” the analyst commented on the prospects of a move lower in the coming weeks.

After the correction, he expects a bounce towards $12,000. 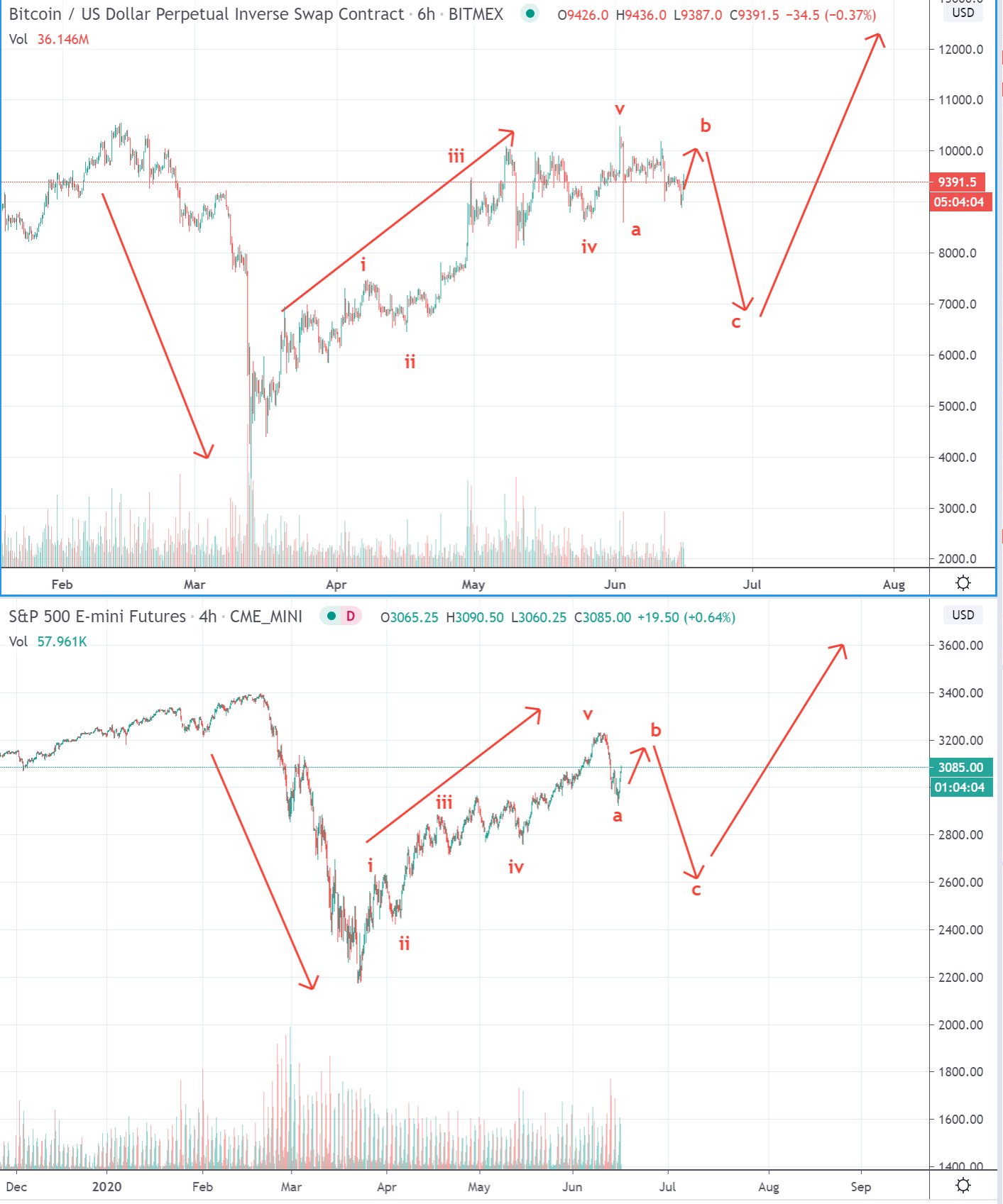 Stock Market Crash Could Change That

While the aforementioned trader is predicting a slight retracement in the value of equities, a larger equities crash could cancel the medium-term bull case depicted above.

Scott Minerd, the global CIO of investment and financial services firm Guggenheim Partners, recently told CNBC’s “Closing Bell” that the S&P 500 could retrace by almost 50% in the coming months.

His argument boiled down to three core factors: the index broke a technical uptrend formed after March’s capitulation, stocks are extremely overpriced as markets shake off the revenue declines caused by the pandemic, and the “don’t fight the Fed” argument is flawed.

Bitcoin will move lower if the S&P 500 does.

As Arthur Hayes, CEO of BitMEX, once said:

“Bitcoin will be owned unlevered. Could the price retest $3,000? Absolutely. As the SPX rolls over and tests 2,000 expect all asset classes to puke again.”

The existence of a correlation was echoed by crypto trader Avi Felman, a trader at the BlockTower Capital. He recently said on the matter:

“If you’re sitting there thinking we’re headed for 11k but that we’re also about to experience a second wave I’d rethink that. If BTC can’t break 10k during a raging equity bull party not sure I see 11k BTC with Hertz below $1.”

Building a Bigger Tent: A Conversation with CoinDesk's Michael Casey about the Challenges…

Building a Bigger Tent: A Conversation with CoinDesk’s Michael Casey about the Challenges and Opportunities in Growing the Blockchain Community. source YouTube