It’s been a slow past few weeks for the Bitcoin market. The cryptocurrency has effectively been range-bound for two months, registering no concrete trend.

Despite this, blockchain analytics firms have observed an increase in usage of BTC. Santiment reported on July 2nd in reference to the chart below:

“Just two days after ETH recorded its highest network activity since 2018, the number of daily addresses interacting with BTC also surged to a 2-year high of 1.07M yesterday! The last time BTC’s daily address activity was this high was Jan. 17th, 2018.” 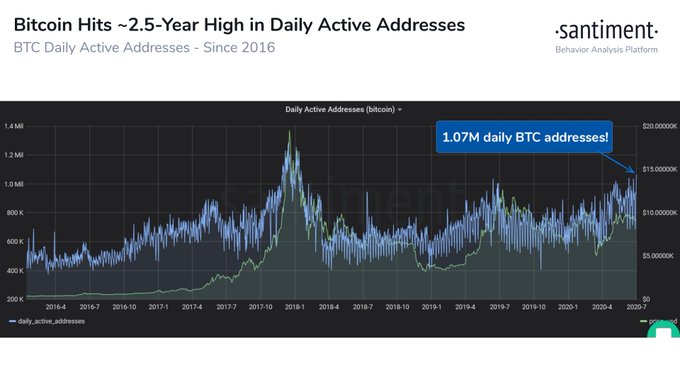 Chart from Santiment (@santimentfeed on Twitter) showing the number of daily active addresses on Bitcoin.

That’s not all. As reported by Bitcoinist previously, an on-chain analyst observed that the number of new BTC addresses and the number of transactions also hit notable highs.

According to a Bloomberg analyst, this spike in on-chain Bitcoin usage warrants a higher BTC price.

On July 2nd, Bloomberg Intelligence’s Mike McGlone released the company’s latest crypto outlook. Entitled “A Resting Bitcoin Bull,” McGlone held his bullish sentiment that he has touted in these monthly reports since the start of 2020.

Core to his expectations of upside is the spike in the on-chain usage of Bitcoin.

Referencing similar data to that Santiment laid out, McGlone wrote:

“The number of active Bitcoin addresses used, a key signal of the 2018 price decline and 2019 recovery, suggests a value closer to $12,000, based on historical patterns. Reflecting greater adoption, the 30-day average of unique addresses from Coinmetrics has breached last year’s peak.”

The analyst added that the last time this metric exceeded its last high, Bitcoin rallied from the “depths of a bear market.”

As to where exactly this trend will take Bitcoin, McGlone implied a move towards $12,734 when he wrote:

“Unless advancing addresses abruptly reverse, history suggests Bitcoin may gravitate toward that level.”

Far From the Only Trend Signaling Upside

The strong on-chain usage of Bitcoin isn’t the only thing that has McGlone expecting cryptocurrencies to sustain a move to the upside.

The senior commodity analyst at Bloomberg identified the following confluence of trends as signals indicating BTC has room to grow:

Bitcoin & Litecoin are getting closer and closer to key area of resistance. We continue tracking Bitcoin and Litecoin price as much of the market wonder. source YouTube

Following the massive Twitter breach that saw many high-profile accounts tweet about a bitcoin giveaway, a popular Indian Youtuber now claims that his Youtube channel was hacked for the same purpose. Hackers replaced some content […]

Is Crypto Mining Still Profitable in 2020?