Bitcoin’s price action has been extremely boring over the past two months. The crypto has been range-bound, barely deviating from a medium-term range as bulls and bears duke it out.

This comes in spite of the fact that by multiple on-chain measures, Bitcoin is stronger than ever.

On-Chain Case For a Bitcoin Bull Market Grows Even Further

The CTO of blockchain data firm Glassnode, Rafael Schultze-Kraft observed on July 1st that Bitcoin is strengthening from an on-chain perspective. He observed the following four statistics, all of which have reached notable highs: 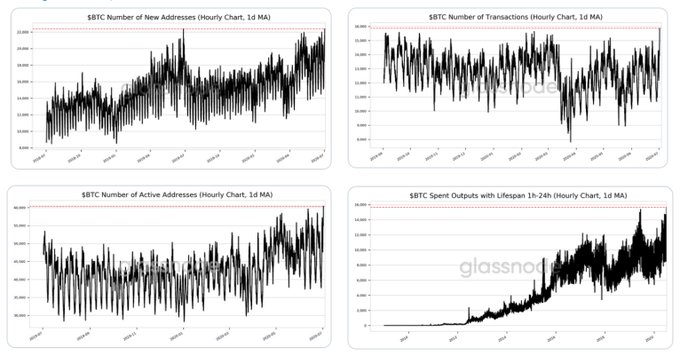 It isn’t clear why this taking place now, yet there are other on-chain trends signaling fundamental strength for Bitcoin.

As reported by Bitcoinist previously, on-chain analyst Philip Swift noted that the amount of BTC being “HODLed” has reached an all-time high.

“Bitcoin 1yr HODL new ATH!! We have reached a new all-time high, with 62% of bitcoin not moving on-chain for at least 1 year. Strong hands from hodl’ers! Such high levels of HODL’ing have been present at the start of previous Bitcoin bull runs,” Swift wrote on the matter.

A separate analysis from Schultze-Kraft corroborated this trend.

Data from Glassnode he shared indicated that HODLers have accumulated Bitcoin 90% of the days in 2020. Adding to this, there has been a mass exodus of BTC from exchanges, indicating a decreasing propensity to sell the cryptocurrency.

If the cryptocurrency is seeing increased usage as both a medium of transfer and a store of wealth, what is holding Bitcoin back?

At least for the time being, it seems to be uncertainty in traditional markets.

Analysts have observed over recent months that a correlation has formed between the S&P 500 and BTC. That’s to say, the cryptocurrency’s directionality has effectively been decided by the equities market.

The image below from digital asset manager Charles Edwards depicts this correlation.

JP Morgan analysts have also observed the correlation. A group of strategists at the bank argued in a June 11th note that since March’s crash, “Cryptocurrencies have traded more like risky assets like equities—a significant change relative to the prior couple of years.”

With the S&P 500 still ping-ponging between 3,000 and 3,200 while pandemic fears still exist, BTC has stagnated as well.

How To Mine Bitcoin On PC, Mac, Or Linux

In this episode of Crypto Miner Tips, we go over how to get started Bitcoin Mining with a PC. However, the mining software mentioned in this tutorial can be used … source YouTube

Australians Can Now Pay for Bitcoin at 3,500 Australia Post Offices

[ad_1] Australian residents can now pay for bitcoin at more than 3,500 national post offices. The new service launched by Bitcoin.com.au is aimed at promoting cryptocurrencies to mainstream audiences, alongside established businesses and organizations. On […]