After the May 11 halving, some skeptics speculated that miners would capitulate or that the entire process would enter a death spiral. Fast-forward three months and the Bitcoin (BTC) hash rate is at a record high.

An all-time high hash rate and a stable Bitcoin mining industry are both positive signs for the medium to long-term trend of BTC.

A rising hashrate is a positive for Bitcoin

According to data from Glassnode, the mining difficulty of Bitcoin increased by 3.6% on Aug. 24 and is now at a new high. The data shows that many miners are actively mining BTC, even more so than before the halving occured. 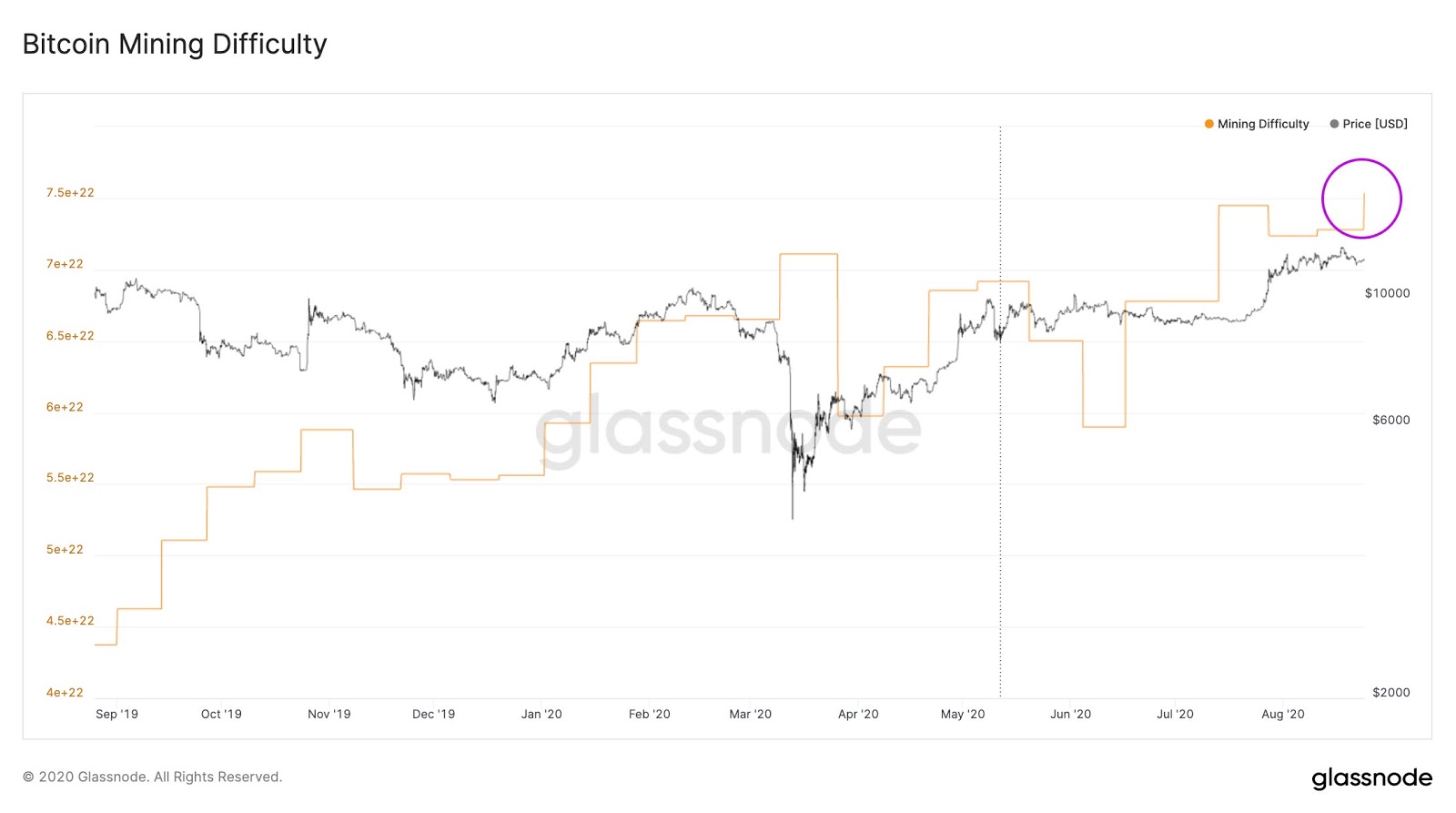 Although the Bitcoin hash rate has continuously hit new record highs over the years, this time is slightly different due to the timing.

Three months ago, Bitcoin underwent its third block reward halving in history. Due to the fixed supply of 21 million, the rate at which the remaining supply is mined drops by half every four years through a halving.

As such, miners earn 50% less Bitcoin every four years, despite spending an increasing amount of money on electricity and other operational costs.

Theoretically, an increasing BTC price should offset the lower number of BTC miners earn. But, the price of BTC would have to double within a short period to make mining more compelling.

The rapid recovery of the hashrate since the halving and the all-time high difficulty suggest miners are anticipating a strong medium-term Bitcoin price trend.

Another reason behind the surge in hash rate could be the profitability of miners in China. Sichuan province is currently going through the rainy season and the abundance of hydro-electric power plants in the region allows miners to obtain cheaper electricity, which in turn reduces their overall costs.

“Bitcoin mining revenue with the latest generation hardware ranges anywhere from $70/MWh to north of $200/MWh depending on price, global hashrate, and difficulty. Power is currently generated at a price of $17 an MWh at a Natural Gas Plant. Do the math.”

The confluence of cheaper electricity in China and the optimistic stance of miners on the price of BTC appears to be catalyzing the hash rate.

Sarcastically implying that the mining sector is nowhere close to capitulation, Rafael Schultze-Kraft, the chief technical officer at Glassnode, said:

“Difficulty has increased 9% since the halving. ‘Miner capitulation’.”

The term miner capitulation refers to a phase wherein the majority of overleveraged and small miners shut down. Capitulation could cause the hash rate of Bitcoin to decline substantially in the near-term but since May there has been no noticeable decline in Bitcoin’s hash rate.

Does a rising hashrate equate to reduced selling pressure?

Willy Woo, an on-chain analyst, previously said that miners are one of the two main sources of external selling pressure on the Bitcoin price. When miners sell off BTC, it tends to apply significant pressure on the cryptocurrency market.

Based on the trend of the mining difficulty and hash rate, miners are not likely to sell BTC en masse in the near term.

Unless the price of BTC drops intensely to the point where miners can no longer sustain operations for a while, the momentum of the mining sector will likely remain strong.

[ad_1] Dan Held is a Texan who doesn’t drive a truck, drink beer, love Trump, or watch sports. He’s a tech enthusiast who isn’t into coding. He looks like a typical preppy dude, wearing a […]

[ad_1] ﻿﻿﻿ Ethereum Classic has suffered its second 51% attack in less than a week, bringing the ongoing security of the network into question. During the attack, the offending miner managed to double-spend $5.6 million […]

[ad_1] Bitcoin (BTC) exchange reserves are continuously plummeting as analysts pinpoint the trend to a shortage of sellers. Since the March crash, the reserves on exchanges rapidly fell from 2,950,000 BTC to 2,700,000 BTC. Within […]